The International Cognitive Linguistics Association mourns the loss of a founding member of our community, Gilles Fauconnier, who died on February 3, 2021. Gilles was a Distinguished Professor Emeritus of Cognitive Science at the University of California, San Diego. He was perhaps best known to the ICLA community at large as the discoverer of mental spaces (as he always said, "Not the inventor - they were there all along!") and the developer of Mental Spaces Theory.His work on logic in natural language, reference, negation, conditionals, and on metaphor and conceptual blending, has had a profound impact on the fields of linguistics and cognitive science.

Fauconnier started his academic training with an engineering degree in Math and Physics from the Ecole Polytechnique in Paris in 1965, followed by a D.E.A. in mathematical logic and the algebra of categories from the University of Paris in 1967, a Ph.D. in Linguistics from UCSD in 1971, a doctorate in Linguistics from the University of Paris-VIII in 1973, and a Docteur es Lettres et Sciences Humaines in 1976 from the University of Paris-VII. His practical bilingualism (he lived in Kingston Ontario before the age of 10) allowed him to easily bridge the Atlantic, while his interdisciplinary academic career bridged disciplinary walls.In particular, as he moved to work on natural language, he used his background in mathematical logic to build a model of human cognition that accounted for differences between formal logic and human reasoning.

His professional career began in France, where he taught at the Ecole Polytechnique and in the program in Language Sciences at University of Paris-VIII, while acting as a Director of Research at the Ecole des Hautes Etudes en Sciences Sociales. In 1988, he was hired as a Professor of Cognitive Science at the University of California, San Diego (UCSD), serving as founding faculty in the world's first Department of Cognitive Science. He was known to undergraduate cognitive science majors as the faculty member who required them to read Gödel, Escher, Bach, and to countless PhD students in linguistics and cognitive science who participated in his seminars. He served briefly as Chair of the Cognitive Science Department, where he impressed his colleagues both by convincing the dean to allow him to make 5 simultaneous offers for a single tenure track job search and by publishing a book (The Way We Think) during his tenure as chair. Fauconnier remained at UCSD for the remainder of his career. He was promoted to the rank of Distinguished Professor in 2002, became a Distinguished Research Professor in 2008, and officially retired as Distinguished Professor Emeritus in 2013.

Over the course of his career, Fauconnier received a number of awards. In 1961, he was the recipient of the Laureate of the Concours Général in Mathematics and English. In 1969, he was selected as a Fellow of the American Council of Learned Societies. He was a Fulbright scholar in 1968 and in 1984. In 1998, he was awarded a Guggenheim Fellowship. In 1999, he was elected as a Fellow to the American Philosophical Society. He also served as a Fellow at the Center for Advanced Study in the Behavioral Sciences during the academic year 1999-2000.

Fauconnier's publications are not just influential but foundational to cognitive linguistics. Mental Spaces (published in French as Espaces Mentaux 1984; in English by MIT Press 1985; reprinted by Cambridge U. Press 1994) developed the framework of mental spaces, allowing a single formalism to account for a wide range of phenomena, from referential opacity to the indirect reference involved in metaphor and metonymy. This early work emphasized the interaction of referentiality with belief and knowledge structures, including depiction, conditionality, and negation.The audience for this book was the 1980's linguistic community, who needed to see the ways in which logical semantic representations could be reframed to better fit human language. Fauconnier co-edited a volume of work in this model with Eve Sweetser in 1996 (Spaces, Worlds, and Grammar, University of Chicago Press) that showcased the influence of this framework on the then thriving cognitive linguistics community in California. Accordingly, Fauconnier's Mappings in Thought and Language (Cambridge UP 1997) addressed a more developed cognitive linguistic community, and worked out a range of added subjects, including a Mental Spaces model of tense which has been developed in treatments of a range of languages.

During the 1990s, Fauconnier worked closely with Mark Turner in developing a theory of Conceptual Blending (or Conceptual Integration) that resulted in their joint book The Way We Think (Basic Books 2002). Affectionately dubbed "The Big Book of Blending" by UCSC Professor Ray Gibbs, this work developed a theory of how mental space structures combine productively in a vast range of examples. Fauconnier and Turner show that the very same cognitive apparatus operates in apparently transparent and predictable cases that speakers find unremarkable, and in "bravura" cases which stand out at the pinnacle of human creativity. This work has been enormously influential, generating mental spaces blending research work by linguists in (among other places) Europe, North America, China, Japan, Korea, Brazil, and Mexico.In a testament to the fact that they never abandoned their early mathematical training, Fauconnier and Turner's discussion of blending in complex numbers is a particularly worked-out case of this theory, and in a domain where cognitive analysis is all too rare.

Gilles lived a full life replete with trips to the beach, the cinema, concerts, and other cultural events. His calendar was full of meetings with students, lunches with colleagues, and dinner parties with friends.He was an impressively brilliant mind; everyone who met him felt his accelerated creative ability of analysis and synthesis. He was ready to think and talk about almost anything to anyone at any time -- especially if it related to cognition and language.Indeed, he saw the world as a never-ending source of examples, each indicative of novel aspects of human cognition. Golf scoring revealed the importance of counterfactuals, tennis commentary highlighted compression and blending, and news stories about depression among lottery winners pointed to a paradox of probabilistic reasoning. He listened to American talk radio to expand his understanding of American politics and culture, and his trans-Atlantic political wisdom was profound. He was warm and witty and fun, always quick to notice the manifestations of cognitive phenomena in conversation.For example, Gilles to a newly-met colleague at a conference: "Do you have any kids?" Colleague: "Yes, two, 4 1/2 and 7." Gilles: "Boys or girls?" Colleague: "Four and a half's a girl and seven's a boy."At which point Gilles, genuinely interested in the family, nonetheless quickly pointed out the metonymy involved in that last sentence.

Gilles was a wonderful mentor and colleague, always adopting the most generous interpretation of any comment, possessed of an uncanny ability to extract deep insight from hastily formulated questions, half-baked suggestions, and even garbled ideas. But beyond the academic generosity of his comments, ideas, and discussion, Gilles was also personally generous. He was deeply committed to social justice and academic ethics, and was unstinting in his support for junior scholars.Among the theoretical divisions of linguistics and cognitive science, he stood out as speaking his views clearly, but with unswerving courtesy.The three writers of this are all deeply indebted to Gilles' generosity, as are so many others.We will miss him equally for his work, his friendship, his collegiality, and his ability to ask questions that take us all in new directions.

Gilles Fauconnier's wife, Tina, died in 2019. They are survived by their daughters Isabelle and Judith. For those wishing to make donations in Gilles' memory, the family suggests giving to Habitat for Humanity. 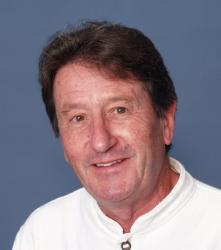 There are no comments.

By signing up as member, you will be part of a stimulating and active scientific community, offering you numerous benefits. Signing up is easy and fast.

Register as a member